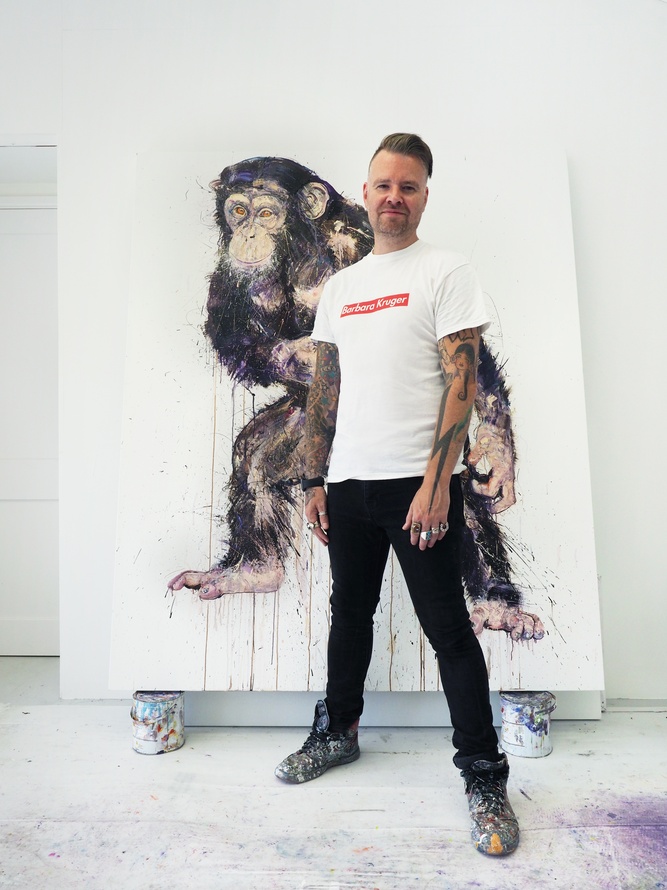 Dave White is a contemporary British Artist who dedicates his work to celebrating popular culture and interpreting emotive issues.  White graduated with a BA (Hons) Fine Art (Painting) at Liverpool John Moores University and has enjoyed success from the inception of his career, with selection for the Northern Graduates exhibition at the Royal College of Art in 1994, whilst also debuting  at Sotheby’s London and international art fairs.

White pioneered the 'Sneaker Art' movement in 2002, with the execution of pop art inspired sneaker oil portraits, leading to long term collaborations with Nike and Brand Jordan which continue to this day. White is one of a handful of artists to have his own signature Jordan releases. In 2016 White collaborated on an international signature sneaker project with Size? x Nike for the AM95 DW, depicting both the Rabbit and Fox artworks from the Albion Collection, which was released in the UK with Size?, Beams Tokyo and Kith, New York with a bespoke colab tee project. Phillips New York celebrated this project in their Tongue + Chic sneaker exhibition in 2018, hand picking 20 artists to celebrate, including Kaws, Hirst and MurakamI. This exhibition recently went on to Phillips Hong Kong and Shanghai (at K11).

Other notable highlights include : a collaboration with MTV to customise an EMA Award for a charity auction in London, launching the Staple Clothing (NY) colab collection, BT ArtBox (London), a feature on The Brit List courtesy of Shortlist Magazine and Harpers Bazaar special art edition (Asia). Loughran Gallery exhibitions include The 'Albion' collection featuring a customised E-Type Jaguar (a hand painted commission), as featured on London Live television.  Fadwebsite described it as one of the top five exhibitions to see during Frieze week.

Whilst White has pursued many subject matters over the last twenty years, for the last decade he has been focussed on environmental issues by promoting endangered species with his signature expressive portraits.  With charitable colaborations and donations of work, he has supported Virunga National Park, Tusk , Rainforest Foundation UK and Wild Aid and most recently WWF with a Tiger installation at Gardens by the Bay, Singapore and a Sotheby's online auction (2022).

2018  White created a hand painted Rhino for Tusk which installed for a month on New Bond Street in London and auctioned at Christie's alongside works by Harland Miller, Marc Quinn, Gavin Turk and The Chapman Brothers.

Phillips Tongue + Chic New York - A sneaker exhibition featuring colabs from artists such as Kaws, Damien Hirst and Murakami which also went on to tour in Hong Kong and Shanghai (K11).

2019 -  White was included in MTV RE:DEFINE Gala Auction at the Goss Michael Foundation, Dallas and had his debut solo exhibition in Tokyo with an accompanying colab with Atmos, Japan. This collection then went on to be installed with artwork at Complex Con Chicago and a Mercedes Tokyo G Wagon colab at Atmos Con Japan.

White's work displayed at Christie's Education Rooms during Frieze week with a subsequent auction at Christie's in aid of Well Child.

Hong Kong, ARTboratory, One must look with the heart, 29 June - 12 July 2021 with Phillips Auction

Dave White continues to work with galleries internationally and special projects will be announced on social media.

Follow @davewhitestudio for the  latest news on Social Media and Artsy for primary and secondary market here....